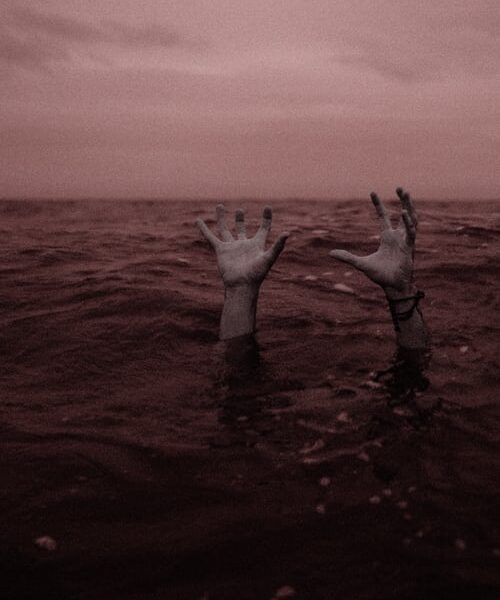 It gets dark early on in October. The sun goes down, shutters the half bare trees. The wind starts to blow, and you can hear the steady creak of wooden planks, seizing up and expanding as the cold comes in waves.

That particular day in October, the day that old man Higgins was snatched, I was walking home with Mosely. We’re supposed to walk home together, Mosely and I, because we’re neighbors. It’s the rules. Because if you’re alone, you get snatched.

They live in the shadows, the snatchers do. Nasty little men with hooks and claws that pull you out of thin air and vanish you into the shadows, and it’s legend that once you get snatched, you become a snatcher too. You wither and die in those shadows until you start deforming into one of them. There’s lotsa rules to the way the snatchers work. They only take you if you’re alone, for one. And they only show up in October. Rumor has it they go on to other towns throughout the rest of the year. And that’s why I was walking home with Mosely on that cold October evening, the sun setting over our heads at merely five in the evening.

Mosely was a funny kid. He and I grew up neighbors, but we never took to each other. I liked chasing frisbees and throwing baseballs, but Mosely always had a book in hand and a nervous look to him, the corner of his mouth always twitching like someone had tried to feed him bugs. We weren’t friends. But it was October, and we had to stay together, Mosely and I.

We’d never seen anyone got snatched, Mosely nor I. Some of the other guys at school had seen the snatchers take Miss Edith, our Sunday School teacher. It was right outside the classroom, they said. They had seen it from down the hill. That was about the time I lost my faith in God.

That day, when Old Man Higgins got snatched, Mosely and I had just turned the corner into our neighborhood. It was a little box set of six houses, all equally run down and spaced apart. The lawns were all patchy and brown, the porch lights all gone out. Mosely’s porch light was shattered from the time I had hit a baseball into it. They never fixed it. After all, who had the money?

Old Man Higgins lived in house number six, the third house down on the forest-facing side. His house turned away from the rest, and so you could only see the corner of his head moving side to side as he tended to his flowers.

And then he was gone. It was like he had been pulled downwards by Satan into the pits of the Earth, sucked into a fiery hell, leaving behind a couple of rhododendron bushes and a spade.

“Caleb,” Mosely said, pointing over to the spot where Old Man Higgins had just been. “Caleb, did you see that?”

“I damn well did, Mo. You think we should report it?”

Mosely shuddered, shook his head. “Hell no. I’m not about to tell my mother I witnessed a snatching. She’ll never let me out again.”

Mosely waved goodbye halfheartedly and rushed into his house, his face paler and whiter than it normally was, if that was even possible. Leaving me outside, alone.

I could’ve gone back inside. That would’ve been the smart thing to do. But instead, I tracked over the cold dirt road, over to Old Man Higgins’ flowers and the patch of soil where he had been sitting.

And it was like I had been sucked into a funnel. Like it had closed around my body, squeezing me, like one of those poisonous snakes you find on National Geographic.

“Number five hundred thirty two,” I heard one of them hiss. My eyes were squeezed shut. If I had been snatched, I didn’t want to look at them. Mosely always said the thing that turned you into them is if you looked at them.

But when they quieted down and I opened my eyes, I was just me. There were no funny men with sticks and knives, there was no Devil, there was no Hell.

I stood up, confused, and ran back down the road, knocked on Mosely’s door furiously. He was the snatching expert. He could tell me what happened.

I pushed the door open, made my way up the stairs to his room.

“Mo,” I said. He didn’t even look up, his face buried in some kind of giant encyclopedia.

He stretched out his long arms, set the book down on his bed, and stood up, walking over to me.

And then he walked directly through me.

That’s when I felt myself start to

Tasha Jensen is a sophomore from Cincinnati, Ohio. She enjoys creative writing, especially writing short stories. When she isn't writing, you can find her playing basketball or dancing.