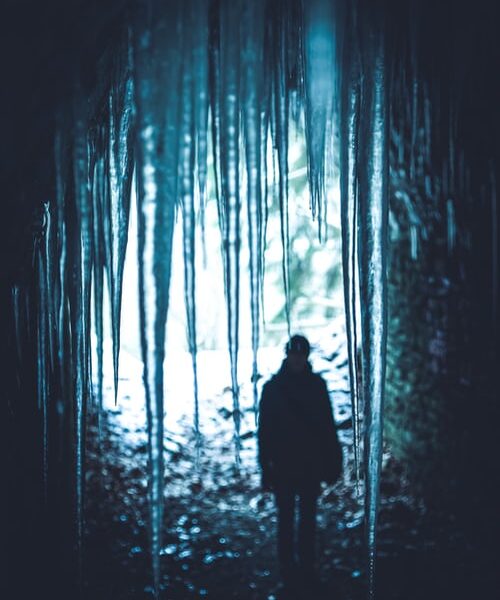 Jack runs through the brambled undergrowth of the forest, branches knocking into his forehead and kissing scrapes onto his cheeks and arms. He can sense it behind him, the looming presence of the creature who had tried to take his life. As much as he runs, the creature doesn’t let up. He can feel the creature closing up on him, doggedly persisting.

Jack pushes aside a slimy, mossy tree growth and slips off the trail, into the dead of the forest. There are no more light fixtures, just an endless expanse of dark. The snorting breaths of the creature seem distant. Jack collapses against a tree, trying to silence his heaving pants. He peeks his head around the corner, revealing only the tips of his brown hair and the curve of his nose.

The creature is nowhere to be seen. It must have continued up the trail.

Jack runs his hand through his sweaty hair, slicking it back with the wetness that is already there. He doesn’t know why the creature is after him. But it showed up one day, just a tiny thing, in his room. He had ignored it at first, thought it to be a mouse or some other small nuisance. But it kept growing, nagging at the back of Jack’s brain, until one day, it was larger than Jack himself.

That was when it had truly started chasing him. The creature would show up sometimes and follow Jack through all kinds of environment. He had run screaming through the town square, the creature’s clubbed tail swinging around and knocking the stone off the fountains. But when the authorities arrived, they had ticketed Jack instead of apprehending the creature. They pretended it didn’t even exist.

Jack had realized that day that he was special in a cursed way. He was the only one who could see the creature in all its monstrosity – flaming ears, foaming mouth, ugly, misshapen red eyes.

Jack sighs and wanders out of the forest, back onto the path. The creature disappeared like that sometimes. It showed up whenever Jack was feeling upset, or angry, but as soon as he had calmed down, it left. It worked strangely.

Jack wanders back down the trail, this time avoiding the scratching branches. His cheeks sting from the cuts.

And then, from the trees, the creature approaches.

Jack jumps back, crosses his arms over his chest. It occurs to him that this is the first time he has ever seen the creature’s face up close. He had seen it before, but never within six feet like he was right now.

And he realized, looking at it, that the creature was some mutated, grotesque version of himself.

Alistair is seventeen years old, and he is from Virginia. He likes to write stories and is working currently on a fantasy novel. He is excited to be a part of this community.