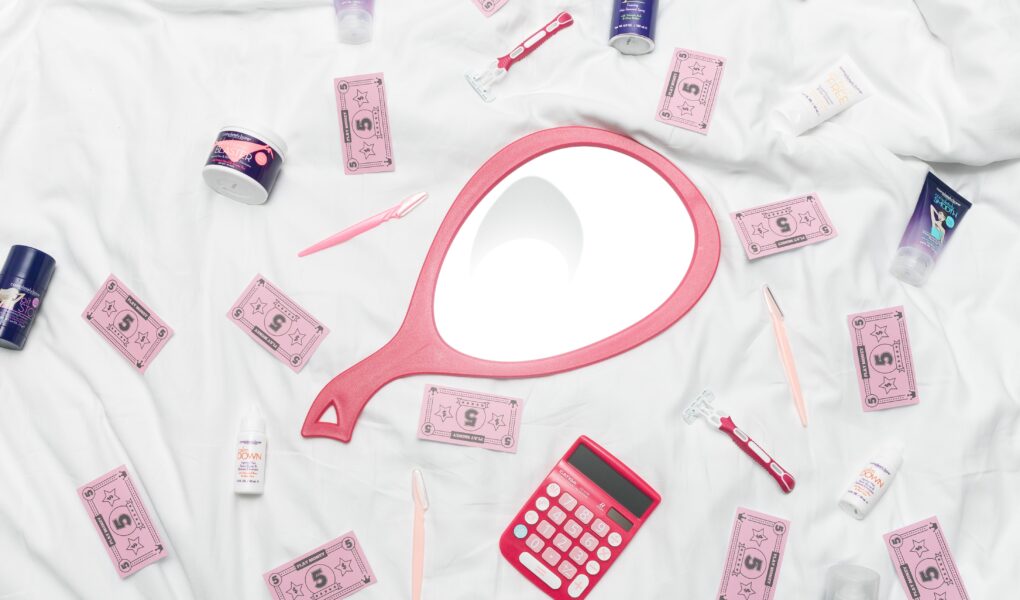 Are you a woman? Do you menstruate? Do you purchase products marketed towards women? If you answered yes to any of the above questions, you’re paying the pink tax. And you’re not alone. Roughly half of the population is currently paying this “tax”. And they’re probably not even aware that they’re paying it.

You might already know about the gender wage gap, or the difference in earnings between men and women – in 2018, women of all races earned, on average, just 82 cents for every $1.00 earned by men of all races. The wage gap is a big problem, but it’s only one aspect of the gender inequality women face in today’s economy. In addition to making less than men in nearly every job, women also pay more for similar or identical products and services.

What is the pink tax?

The pink tax is not actually a tax; rather, it refers to the extra amount of money women pay for products or services targeted at women. Sometimes you’ll hear it called price discrimination or gender pricing. The term “pink tax” came about because of gender-based advertising – products marketed towards women are often produced with in pink along with glitter, fruity or floral scents, and other traditionally feminine embellishments.

The pink tax is everywhere, most notably in feminine hygiene products, women’s clothing, women’s care products. If you compare the prices of those cheap razors you see in a typical drug store, you’ll find that although they are the exact same product (with the exception of the color or the label), the woman’s version inevitably costs more. In fact, research has found that on average, women’s razors cost $0.91 or 11% more than men’s razors. And this is just one of many examples. If you look at shampoo, body wash, deodorant, colored pens, or even clothing, you’ll see that products marketed towards women are nearly always marked up compared to products targeted at men.

Although it may not seem like a lot – a couple cents here, a couple dollars there – the money adds up. The pink tax on goods and services costs the average woman an extra $1,351 per year. Find out exactly how much the pink tax has cost you over your lifetime here.

Why does it exist?

The precise cause of the pink tax is difficult to determine and most likely varies depending on the product or industry. There could be several legitimate reasons for the price differences relating to differences in production costs. First, differences in tariffs contribute to the pink tax – on average, clothing imports for women are taxed at 15.1 percent compared to clothing imports for men, which are taxed at 11.9 percent. Another factor is product differentiation, in which sellers distinguish a product or service from others by targeting a particular market (e.g. women) by changing the packaging or appearance of the product. This could increase cost of production and therefore market price. In some cases, businesses might be forced to raise their prices for women’s products in order to say competitive in a market where the pink tax is a norm.

However, in many cases, it’s simply a matter of price discrimination (the practice of charging customers different prices for the same product or service). Since women are willing to pay more for “female” products, companies raises prices simply because they can.

Even so, we can’t pin all the blame on retailers. Nowadays, the supply chain is too complicated to pinpoint exactly where the pink tax comes from. What we do know for sure is that the pink tax exists, and female consumers are the ones paying it.

The scope of the pink tax

The New York City Department of Consumer Affairs conducted a study in 2015 comparing the prices of 800 products, aiming to estimate the price differences in the same products targeted at women vs. men. The study found that on average, women pay more than men 42% of the time. On the other hand, men paid more than women only 18% of the time, and rest of the time, pricing was equal. Across all five industries analyzed (toys and accessories, children’s clothing, adult clothing, personal care, and home health care for seniors), women’s products cost 7% more than similar products for men. And in all but five of the 35 product categories analyzed, products targeted at women had higher price tags than those targeted at men.

It also isn’t limited to consumer goods. Women pay the pink tax for services as well, the most common examples being personal care services such as dry cleaning and haircuts. A 2011 study surveyed 100 hair salons and found that 85 charged more for a basic women’s haircut than a basic men’s haircut, and the average price being paid my women was 54 percent higher than the average price paid by mean. This study also found similar price differences for dry cleaning dress shirts – women’s shirts cost on average $1.89 or 92 percent more than men’s shirts.

The tampon tax disproportionally impacts people who menstruate, especially those from low-income households. Women in the U.S. spend roughly an additional $150 million per year on menstrual products. Although several states have enacted legislation to remove the tampon tax, 35 states still have a sales tax on feminine hygiene products as of June 2019.

There’s no simple solution to the pink tax problem.

The easiest way to fight back against the tax is to be a smart consumer and vote with your wallet. One option is to switch to the unisex or “men’s” version of products commonly overpriced for women, such as razors or shampoo. Another is to purchase products from and support companies that are taking a stand against the pink tax (such as the ones on this list) and companies owned by women. Avoid companies that have blatantly gender-based pricing and call it out when you see it.

You can also get politically active by supporting legislation that aims to eliminate the pink tax. In April 2019, California Representative Jackie Speier sponsored the Pink Tax Repeal Act, which would ban gender-based price discrimination. This bill is currently in the early stages of the legislative process. Contact your state representative and voice your support for the bill, as well as any concerns or frustrations regarding these issues (you can find your representatives here). Finally, when you vote, always research candidates’ stances regarding gender-based price discrimination so you are making informed decisions.

The bottom line is that the pink tax affects women everywhere, costing them thousands or even millions of dollars over a lifetime simply because of their gender. The pink tax is a real problem, and if we want change, we have to make it happen.