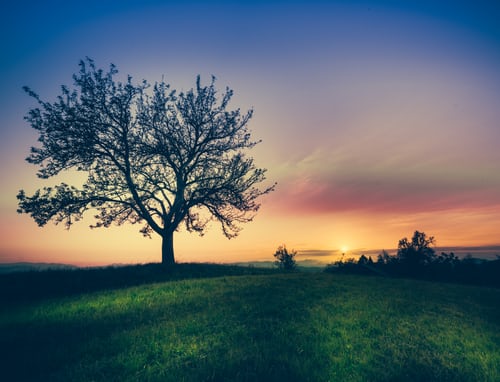 The sky was ripe with meaty, silver-speckled pinpoints of light and magic. Summer June heat flooded my roots, leaving my eight-year-old trunk sighing and whispering in warm rumbles. The grove was quiet tonight.

Silence for the long-anticipated festival of the year—Dance of the Stars. The title was self-explanatory. Stars would put on a show for one night, and whoever saw it would go home blessed.

Some called it superstition or a tourist attraction—most of the unbelievers being ones who’d waited for hours underneath the dusky sky, only to fall asleep and wake to grouse in the morning about cricks in their neck. Others would call it a fairytale, something to keep the children of Virginia from staying awake past their bedtimes. But the locals, the farmers who lived and breathed the life of grassy fields under clear night skies would smile. Nature filled their bones and ran through their veins. They knew where to look and wait.

I grew from the tiniest of saplings. Farmer Duff wasn’t sure whether I’d survive. He tended to me every day, wood-worn hands scooping soil into neat, orderly little piles. Freshwater from the stream.

Because of him, I was quiet tonight. He’d been the one to whisper stories to our grove since childhood. And his favorite was the Dance of the Stars. So I waited. Stood firm and resistant to the playful east wind, the child who always insisted on tickling my spindly hawthorn branches instead of following its siblings across the world.

It must have gotten the message after some time—it flitted away in a disgruntled huff, leaving cold, drafty annoyance in its wake.

The stars glimmered once, twice, in response to my stolid resolve to the grove’s cause. I rustled my leaves excitedly. It was about to start.

Every year, the Dance of Stars transformed into something more marvelous, more enchanting, than the year before.

And every year, sap would quiver in globs and rivulets up and down the marbled ridges of my twisting trunk.

I gave the neighboring hawthorn a little nudge with my roots. Are you ready?

I stood in anticipation, and—oh. It was expected, per the yearly usual, but still.

Two humans—by the look of them, a clean-shaven man donned in disgusting plaid, and a plump, pretty brunette with an unfashionable-looking picnic basket. Last year, it had been two giggling girls who chattered to each other and traded kisses all night. The year before that, a group of seven boys who were curious to see the spectacle of the sky.

The man spread out a red-and-white blanket—typical—that matched his shirt, and the woman trilled with glee and dove to the ground with no regard for the poor picnic basket, whose golden fruit and honeyed wine spilled out.

The man and woman laughed. A bright-as-bells sound. A sound I could never make.

To make it worse, they were squashing my younger roots. Idiots. Absolute bumbling idiots.

The woman reached up to one of my branches and plucked a flower. I thrust my branch away from her indignantly. The gall of her!

She giggled naively, threading the seashell-white bloom in her lover’s hair, twisting its poor fuchsia stem in a way that made my insides churn.

I gave them some privacy, finally looking down after a good half an hour. Immediately, I felt the need to avert my eyes.

Sticky strawberry fingers slid across each other’s spines, gliding across hearts. Painting stories in skin. They were bathed in moonshine, glittering with night’s kisses. Skin shimmering singing sighing oh—how I longed to be one of them, live as they did. Freely, proudly, as if the world was theirs to relish, its delights laid out for sampling.

But I could only live vicariously through them. Their sticky-sweet fingers. Flushed cheeks. Hot blood. Racing pulse. Sounds spilled.

I smiled at the couple ruefully.

The stars were falling around them in waterfalls of boysenberry-mauve and shimmering hyacinth-gold.

The five, pointed tips spun and spun again, partaking in a never-ending dance.

The sky was on fire and drowning.

My flowers and leaves were covered in the heady-soft, already-dissolving warmth.

Looking at my trunk, no one could have told that my bark was sepia brown. I was covered head to toe in a sheen of never-ending, glittering silvery gold.

I looked around the grove. At my friends. Their trunks were swaying with the wind, which had come back to play with us.

I ripped my roots so that my trunk towered over the puny man and woman. And I started to sway. We were dancing in a blue-gold beat, to a starry, syncopated rhythm.

The grasses were even dancing, their blades glistening with something prettier than morning dew—for once.

Shrill, yet melodic whistling pierced the air. The crickets were singing.

They picked up their flutes of champagne, toasted to the stars, and downed the contents of their glasses in greedy gulps.

One of them started to sing dissonantly, disrupting the lovely tune of the crickets.

In response, the crickets were summoning up all the air in their shriveled lungs.

I knew what came next.

A blast of sound resonated through the entire grove, lifting

vibrations as far as to the sky and down to Hades.

Hastily, the humans packed up their ugly blanket into a roll, leaving as quickly as they had come.

The sounds of crickets pealing with witchlike laughter echoed in the grove.

Slowly, the humans packed up their ugly blanket into a roll, leaving as quickly as they had come.

I watched them go with an odd sort of sadness.

Like I was missing something I’d never get back.

I craned my trunk to the whispering midnight sky.

Dance of the Stars was over. The serrated edges of my leaves sighed in deep, spirited green.

I looked at the sky, once again dotted with dim pinpoints of light.