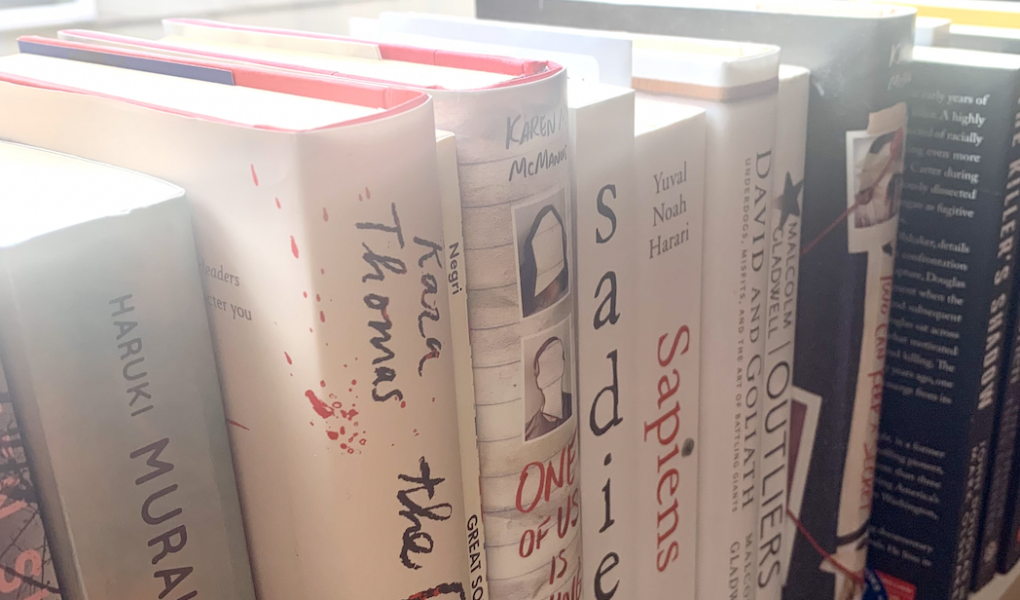 I don’t like fantasy novels. I just don’t. I don’t have a solid reason for it – I’ve just never gotten into made up worlds and creatures. I prefer to read about what I know about – high schoolers in a contemporary setting. So obviously, I’m thrilled about how contemporary novels have grown in popularity over the last decade or so. Everyone’s heard of contemporary best-sellers like One of Us is Lying or Sadie, but I’m here to give you some recommendations you either might not have heard of, or they’ve just hit the shelves.

This book came onto the contemporary scene about a year and a half ago, and it’s one of the only YA books I’ve read that does pop culture references well. I absolutely hate when adult authors insert outdated Harry Potter references into their writing, because that’s not what teens are into nowadays. But Emma Lord does a great job incorporating twitter culture into her book in a way that’s believable. Essentially, the teenagers act like today’s teenagers.

I loved this book because of the complexity of the storylines. I don’t want to give away too much, but there are essentially three competing storylines – the twitter war, the in person interactions, and the interactions on the anonymous app.

2. The Voting Booth by Brandy Colbert

I listened to this audiobook while I was on a run – and I actually ended up running a couple extra miles just so I could continue listening to this book. That’s how good it was. This book handles important issues such as voter suppression, racism within the policing system, white privilege, all while giving us a wonderfully cute romance between the two main characters.

Even though the characters fall for each other within a day, it’s actually believable, unlike many other YA novels. I really think this book is going to be making waves. It’s a fantastic read, and I think every teenager needs to read it. Brandy Colbert covers these topics in a way that’s easily digestible, and I applaud her for creating such effortlessly likable characters.

You can purchase The Voting Booth here.

3. Charming as a Verb by Ben Philippe

I’ve seen this book on a lot of lists lately, and decided to check it out. I didn’t have high expectations – it just seemed like another high school romance – but I was blown away by both the writing and the characters Ben Phillipe created.

The story revolves around a boy who would do anything to get into Columbia – the college of his dreams. But what happens when those dreams may not pan out? Throw in a quick-witted girl and a dog walking business, there’s no wonder this book has been making a big impact. High schoolers can relate, which is so rare in these contemporary novels.

4. Perfect on Paper by Sophie Gonzales

Perfect on Paper is Sophie Gonzales’s second novel, which I decided to read after really liking her first. It’s great if you like slow burn romances, secrets, and lots and lots of drama. The main character is somewhat morally gray, but you find yourself rooting for her anyways. And, it features a British love interest you’re sure to love.

I really liked this book because of the way it treated LGBTQ+ issues. The main character was bisexual, but that was a known and accepted fact, rather than a major plot point of the book. There were several supporting LGBTQ+ characters as well, and overall, the characters were very diverse and representative.

You can purchase Perfect on Paper here.

5. This Will be Funny Someday by Katie Henry

I read this book a few months ago, and it’s one of the only books I’ve ever read that I would give 10/10 stars to. The main character was so likable (although she could be frustrating at some points). The storyline was fantastic, and the character development was done fantastically.

This book deals with emotional abuse on the part of the main character’s boyfriend, so please keep that in mind before you start reading. However, the main character is able to leave the boyfriend at the end of the novel with the help of her newfound friends and her family. I really enjoyed this book, because it deals with some themes of high school and being a teenager that other books fail to implement or just forget to cover altogether.

You can purchase This Will be Funny Someday here.

If We Were Us is a book I finished in one sitting – and that doesn’t happen often. I really enjoyed the alternating points of view in this book. In most books with alternating points of view, the characters start to sound one and the same – after all, they were written by the same author. But that’s not the case in this book. Both the main characters have distinct voices and characters, and Walther has a way of making you feel for these characters in a way other authors can’t.

The main characters were both super likable, and the supporting characters also added tons to the book. While this book had nothing unique in terms of the actual plot, Walther has a way of writing these characters that will keep you hooked until the very end.

You can purchase If We Were Us here.

7. Yes No Maybe So by Becky Albertalli and Aisha Saeed

This is the kind of slow burn romance novel that has you itching to get to the end. This is another book I finished in one sitting, just because of how anticipatory I was to know what happened. Just like The Voting Booth, this book centers heavily on the importance of voting in small elections and the impact one vote can have. This book also focused on topics such as Islamophobia and racism.

I really liked this book due to how the romance was mixed in with the main characters’ efforts to canvass for their local election. The characters were super likable, and I found myself rooting for them from the very beginning. And the fact that two separate authors wrote each POV made the two characters super distinct and unique.

You can purchase Yes No Maybe So here.

I know I said I didn’t like fantasy novels, but this book was great for me. It was the perfect combination of contemporary with just a little bit of Karma magic that added tons of fun to the plot. The main character was totally unlikable at the beginning, which almost put me off the novel altogether. But I read some goodreads reviews that promised character development, so I kept reading.

Where this book really shone, though, was the awareness the author brought to the rescue of sea animals, and the cast of supporting characters. I learnt a lot about marine animal rescue through reading this book, and I loved the side stories of the supporting characters, who played a big part in helping the main character develop. While the author didn’t do the best job of accurately portraying teenagers, this was still a fun read – and definitely a must read.

You can purchase Instant Karma here.