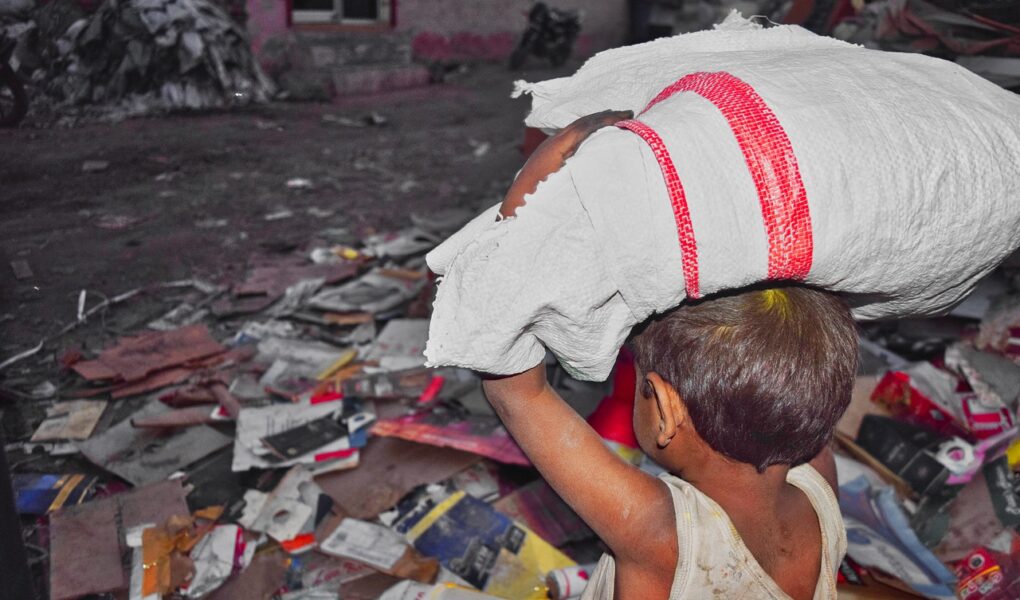 Firozabad is a city in the northern part of India, famous for its glassmaking. Every other family is engaged in this activity. It is the heart of India’s glass-blowing industry where families have spent generations working around furnaces, welding glass, making bangles.

But what remains unknown to the buyers of these multi-colored spirals, is the dark truth behind them.

Girls sit with their mothers, hands moving mechanically. One wonders if they know the sanctity of the very bangles they help make- symbolizing an Indian woman’s ‘suhaag’, auspiciousness in marriage. It will dawn on them suddenly one day when their heads are draped with a red veil, hands dyed red with henna, and red bangles rolled onto their wrists. They will then become bridesz, just as the old women who became so, many years ago- they still have bangles on their wrists but no light in their eyes. All that glitters is -clearly- not gold.

Child labor in India is among the greatest of tragedies, sucking into its web families burdened by the stigma of caste and poverty. Children belong in schools, not workplaces. Child labor deprives children of their right to education and reinforces intergenerational cycles of poverty perpetuated by old traditions of casteism in India. Not only does it affect a child’s performance in school, but some also get pulled out when they are old enough and put to work to provide a source of income for the family. The cruel, unrelenting cycle of child labor poses a threat to national economies and has dire impacts on the children’s rights guaranteed by the United Nations Convention on the Rights of the Child.

As per Census 2011, the total population in India in the age group 5-14 years is approximately 260 million, of this, 10.1 million are victims of child labor, of which 5.6 million are boys and 4.5 million are girls.

An unprecedented consequence of the lockdown due to COVID-19 is in India’s rampant child labor- the homecoming of child laborers who have been working laboriously at factories away from their families for years. Some are reportedly accompanied by their traffickers to prevent them from running away and are at the risk of being trafficked again.

The demand for cheap and instant fashion has also driven companies to look for more efficient methods of production in developing nations, particularly India, and with the relaxed and barely enforced child labor laws, it is one of the hotspots for fast fashion brands to establish factories where workers mainly consist of children.

India has extremely lax child labor protection policies and a new law was adopted, that children below the age of 14 cannot be employed in hazardous occupations. Does that mean it is legal for a two-year-old to be employed in non-hazardous occupations? This law has been met with a fair amount of criticism, it is a very regressive act, issues have been raised and now an amendment is pending in the Parliament, yet it has been pending for a very long time.

Little, it seems, has changed in the city of Firozabad. The cry of not having money to do anything except carrying on the business of making bangles rings in every home. The young echo the lament of their forefathers. Years of relentless toiling have desensitized the ability to dream, lowering the blinds shut, never to be raised again.

Hiba Zaidi is a senior in high school from Muscat, Oman. She has an uncanny passion for classical literature, and plans to pursue Economics and Political Science at college. She's an introvert at heart, a woman of few words who is constantly on the hunt for answers and learning how the world works.