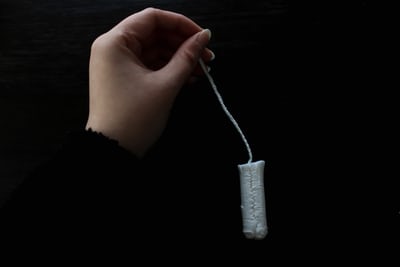 There are many euphemisms for menstruating. “It’s that time of the month.” “Aunt Flo.” A popular one is “the communists are in the fun-house.” In fact, across ten different languages, over five-thousand euphemisms describe a period. These euphemisms are there because of the stigma surrounding menstruation. The word menstruation is ironically taboo, as it happens to ½ of the planet— that’s around 3.7 billion people. However, periods have been written down in history as “dirty” and “gross.” This way of thinking started in Aristotle’s time.

Aristotle contributed many theories to Greek thinking, and one of them was how a female was a defective male due to menstruation. This thinking carried on to modern times, resulting in menstrual products being marketed as “sanitary products.”  “Sanitary”, so that menstruation is sanitized for the general public. It’s ingrained in our society, in our thinking.

One of the most common misconceptions around periods is that only women menstruate. Trans men can menstruate, as well as non-binary, intersex, and gender-fluid people. Society forgets not all women menstruate. Some trans women, pregnant women, and high-endurance athletes don’t menstruate. Not every woman menstruates, and not all menstruators are women.

Another misconception, though relatively unspoken about, is that periods are abominable, and sometimes even a curse. The cause of this issue stems from stigma and has disseminated across the globe. Superstitions in Tanzania and Bangladesh emphasize certain actions during a period can cause one to be cursed. Exclusion occurs in India, where menstruating people are banned from the temple and kitchen during their period and in Ghana, where menstruators cannot enter the same space as a man. In Nepal, menstruators are forced to stay in huts and cattle sheds while on their periods. Known as the Chaupadi practice, death by suffocation or cold winters is common. This is not just a you or me issue; this is a world issue. Even in freedom-riddled places like America, society’s chains of oppressive stigma still tie us down. Ignorance and shame are what is causing us to overlook the problems that menstruators across the world face every day.

One of those problems is inaccessibility to period products. Periods are expensive—over a lifetime, they cost a menstruator over five-thousand dollars. The high cost of periods creates a precarious choice for low-income and homeless menstruators—food, or period products?

Sometimes, that choice becomes life-threatening. In the U.S., only federal jails provide menstrual products for female inmates. This creates a black market which involves submitting to unwanted sexual advances from correctional officers in exchange for menstrual products. The Julia Tutwiler Prison for Women can attest to this. In a report by WHNT19 News, investigators wrote a letter to the state stating “the prison black market left women vulnerable to sexual advances and other demands for favors to obtain them,” explicitly stating the women at Julia Tutwiler were raped.

Lack of access to affordable menstrual products has effects globally. According to UNICEF, 2.3 billion people lack basic sanitation needed during a menstrual cycle. Without access to these products, students miss school for days during their period. Periods, according to FemInternational, are the number one reason that girls miss school. In Africa, one in ten students misses school during their period. In India, one in four students does the same.

The inaccessibility of period products is due partly to the tampon tax. Thirty-four out of fifty states have the “tampon tax”, where menstrual products are taxed exorbitantly. The highest tampon tax in the world is at twenty-seven percent in Hungary. Low-income menstruators, already struggling for food, can’t afford that. Instead, they resort to using grocery paper bags. This often leads to cervical cancer and bacterial infections. In less developed countries than the States, it’s much worse. Instead of pads, leaves, sand, and old rags are used. These unsafe menstrual products have been directly linked to many dire health outcomes. For example, according to Smithsonian Magazine, 70% of all reproductive diseases in India are a result of poor menstrual hygiene. The tampon tax exists throughout the world. Menstrual products are under luxury tax by the FDA and the US Department of Agriculture. The tampon tax’s existence has been widely debated, as Viagra, Rogaine, and condoms are not taxed in the US. They are considered medical necessities.

We challenge you to have a conversation with someone about menstruation after today. The only way to destigmatize periods and end period poverty is to talk about it. Join the menstrual movement. Let us change the world for the better. And let us change it together.