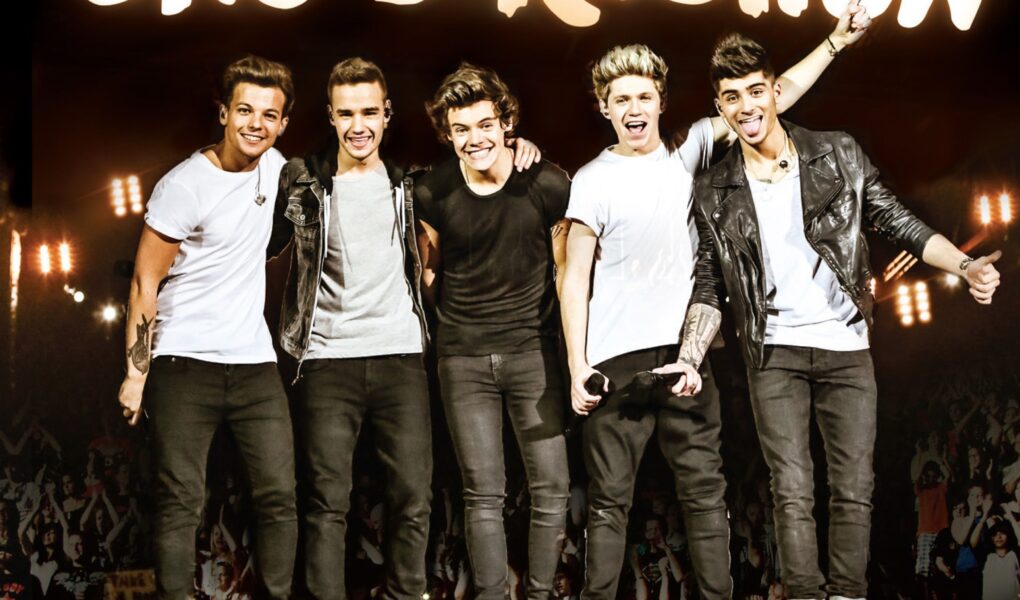 “Baby, you light up my world like nobody else
The way that you flip your hair gets me overwhelmed
But when you smile at the ground it ain’t hard to tell
You don’t know, oh oh
You don’t know you’re beautiful”

I’m guessing you’ve probably already heard those lyrics before – somewhere on the radio, or maybe in a store while shopping. Released in 2011 on One Direction’s album Up All Night, “What Makes You Beautiful” reached the 4th spot on the Hot 100 chart and the album reached the top spot on the Billboard 200 in 2012.

Who Are One Direction ?

While the band was formed by Simon Cowell in 2010 on the X Factor, they broke up five years later in 2015, a few months after member Zayn Malik left their band. Even though they’re apart, they’ve released some incredible solo music. Let’s see what those albums are…

One Direction Albums ! – Up All Night, Take Me Home, Midnight Memories, FOUR, Made in the A.M. (excludes Zayn)

The five teens all separately auditioned on the X Factor, trying to make it big in the music industry. Simon Cowell claims that he is the one that had the idea to put them all together as a group (them being the youngest boy band yet on the show). They went to Simon’s house to sing for him and he immediately knew deep down that they would succeed. After releasing their first album, they came to tour in America. Girls were already obsessed and their shows would sell out almost immediately. People camped outside their hotel to even just be able to see them. The boy band had suddenly captured the hearts of fans around the world.

Harry Styles is from Holmes Chapel, England and was 16 when he auditioned for the X Factor. He was previously in a band named White Eskimo with some kids from school and he also worked in a bakery. He’s the one that came up with the title of One Direction. Now he’s released two solo albums with some of the songs being extremely popular on the radio. He’s also rumored to star in the upcoming movie “Don’t Worry, Darling”.

Liam Payne was also 16 when he auditioned, however it was his second time on the X Factor. He had auditioned earlier in 2008 but the judges sent him home to improve. This time, his audition was a complete hit and the judges loved it. He’s now released one album and has collabed with many artists. He also has a son with Cheryl Cole named Bear.

Louis Tomlinson is from Doncaster, England and is the oldest member of One Direction. He auditioned at the age of 18. Louis has one solo album and has also made songs with some popular artists such as Bebe Rexha. He has a son named Freddie with the LA stylist Briana Jungwirth.

Niall Horan, from Mullingar, Ireland, auditioned at the age of 16. He said he wanted to be a big name in the world and wanted to also sell out arenas. He has two solo albums out right now and recently collaborated Ashe’s song “Moral of the Story” which fans love.

Zayn Malik is from Bradford, England and was 17 when he auditioned. He passed the first round but didn’t want to dance in some of the next rounds. Luckily, he was persuaded to perform the routines and made it through to join the other boys in the band. He left the band in 2015, but has released two solo albums since then and had other artists such as Nicki Minaj and Sia on his second album. He is now expecting a baby with Gigi Hadid.

Directioners (Who Even Are They?)

The 1D fan base has been named the Directioners. However, they’re not like your regular fans. The Directioners know everything about the members in the group from their blood types to the time they were born. Many of them want the band to reunite again but others think they’ve done well as solo artists. There are many inside jokes within the fandom about different events that have happened with the band. Just make sure you never say anything about not liking One Direction because some are a little obsessed with the group.

The story behind the picture above is a heartwarming surprise the fans gave the boys and really shows how much the fandom cares about them. During the Where We Are tour at the show in Milan, Italy, the stadium suddenly went dark. Everyone in the audience help up a piece of paper to form the image you can see above. That shows how devoted the Directioners are.

As I said earlier “What Makes You Beautiful” is One Direction’s most popular song. The next three top songs are: “Story of My Life”, “Drag Me Down”, and “Best Song Ever”. The music video for “Best Song Ever” is extremely fun, with the members playing different characters as well as themselves (as seen below).

Here is the Spotify link for the band.

Simone Gautham lives in Redmond, WA and would love to attend college in England. She can’t imagine life without music and likes to read and talk to her friends.