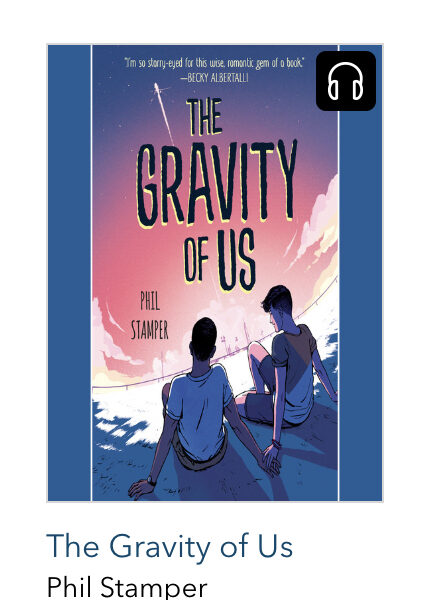 Title: The Gravity of Us

Cal wants to be a journalist, and he’s already well underway with almost half a million followers on his FlashFame app and an upcoming internship at Buzzfeed. But his plans are derailed when his pilot father is selected for a highly-publicized NASA mission to Mars. Within days, Cal and his parents leave Brooklyn for hot and humid Houston. With the entire nation desperate for any new information about the astronauts, Cal finds himself thrust in the middle of a media circus. Suddenly his life is more like a reality TV show, with his constantly bickering parents struggling with their roles as the “perfect American family.” And then Cal meets Leon, whose mother is another astronaut on the mission, and he finds himself falling head over heels–and fast. They become an oasis for each other amid the craziness of this whole experience. As their relationship grows, so does the frenzy surrounding the Mars mission, and when secrets are revealed about ulterior motives of the program, Cal must find a way to get to the truth without hurting the people who have become most important to him.

I thought I would enjoy this book a lot more than it did. Not to say I didn’t enjoy it – in fact, there were certain parts of the story I really liked, and certain parts I would have scrapped to give more time to the aforementioned sections that were really good. I liked the writing style a lot, and the dialogue between the teenagers was not stilted like how most adults write teenage characters. In fact, I believe I would have given this book four or five stars if it weren’t for the protagonist.

Let’s start with Cal, and what I didn’t like about him. Right off the bat, Cal shows interest only in himself and his own life. In fact, when his dad gets the job at NASA, Cal doesn’t even congratulate him on his success or willfully join in the celebration. While it’s hard to wrap your head around the fact that you’re leaving everything you’ve ever known behind, Cal does not even stop to comprehend what this opportunity means for his dad. Further into the book, Cal finds out his best friend from New York, Deb, is being evicted. Instead of talking to her about her problems, he immediately is disappointed by the fact that this throws a wrench into his own future plans with Deb. Overall, Cal was an unlikable protagonist, and the major reasons I had issues with this book.

However, there was a second, lesser reason I didn’t enjoy this as much as I thought. The book was marketed as a romance. To me, there was virtually no romance. Cal comes to town, meets the love interest, and they’re together for pretty much the entire book. The romance was a secondary plot line to the main one – Cal exposing the reality network as fraudulent.

But, I really enjoyed this secondary plot line, much more than I think I would’ve enjoyed a romance in the context and setting of this book. So while I had no issues with the plot, I just wish the book would’ve been marketed differently so I could’ve gone into it with a different set of expectations.

Overall, the protagonist was my main issue. Otherwise, I was a huge fan of the plot, writing, and even the setting. I hope to read more of Phil Stamper’s work in the future!