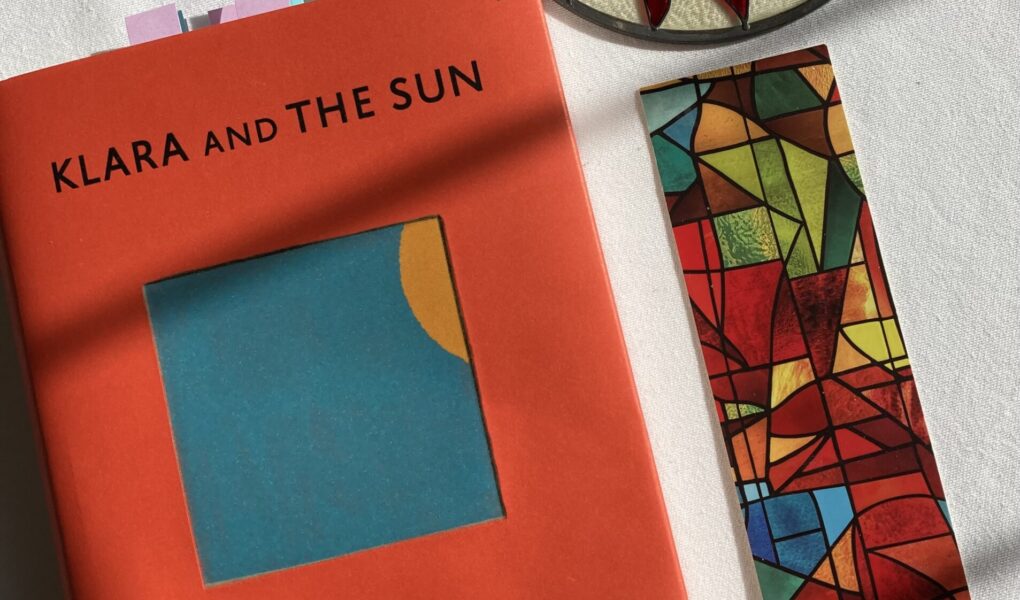 Nobel Prize-winning author, Kazuo Ishiguro’s latest novel, ‘Klara and the Sun,’ is a tale of loyalty, love, and the complexities of the human heart that has set the literary world ablaze. It has been topping the bookselling charts in the UK for months and I don’t see that changing any time soon! It’s a page-turning dystopian novel about an AF (Artificial Friend) called Klara who is taken into a family with a painful past. It seems that history is doomed to repeat itself, and it’s like a dark cloud has descended over their home. Loyal Klara does everything she can to protect Josie – but will it be enough?

Musings on the Metaphysical

Seeing love, misery, joy and a range of other emotions through the fresh eyes of an AF who is trying to interpret them is a compelling concept. Through this novel, Ishiguro ponders the infinite mysteries of the human heart. Whilst Mr. Capaldi’s scientific outlook argues that the entire essence of a human being is transferable rather than unique, I agree with Josie’s father’s view that you can never fully ‘become’ somebody else. The metaphor used here describes the depths of the human heart perfectly, “but then suppose you stepped into one of those rooms and discovered another room within it. And inside that room, another room still. Rooms within rooms within rooms. Isn’t that how it might be trying to learn Josie’s heart?” Technology cannot and will never be able to replicate the complexities of humanity – that is the thrust of Ishiguro’s latest book. Ishiguro’s tender approach to this subject was masterful; it made me, and millions of other readers, contemplate what it means to be human.

Do you believe in the human heart? I don’t mean simply the organ, obviously. I’m speaking in the poetic sense. The human heart. Do you think there is such a thing? Something that makes each of us special and individual?

The ‘Sun’ as a Key Character in the Novel

Being embedded in AF Klara’s mind was at times shocking, for example, the eccentric plan she comes up with (don’t worry, no spoilers here!) and when she speaks to her revered, and always capitalized and personified, Sun. In order to justify Klara’s strange relationship to the Sun, I started thinking about it this way: the Sun is essentially her equivalent of an all-mighty, benevolent god because she depends on its light to power her. Klara even prays and tries to bargain with the Sun as if she were a small child. It is Klara’s sweetness paired with her extreme devotion and a level of emotional intelligence that is unique for an AF, that makes her so loveable and special to readers. That way, when she makes ridiculous choices we never doubt that she is motivated by how much she cares for these humans, so our frustration is tempered. Ishiguro offers us plenty of reminders – her belief in the Sun being the most prominent – that although Klara is considered to be an exceptionally perceptive AF, she is ultimately still a robot and as such, it would be unfair for us to expect her to mentally grasp everything going on around her perfectly. Therefore, it is clear at times that we are meant to think of Klara as an unreliable narrator whose outlook clashes with our own inherently human common sense.

Comparisons to ‘Never Let Me Go’

Just like I recall happening whilst reading ‘Never Let Me Go,’ Ishiguro has a way of pulling the proverbial rug out from under the reader with a sudden dark twist of the plot. There are always clues lurking just out of focus as to what is truly going on, but you can never quite grasp where the story will lead, which makes it captivating to read his dystopian work. I felt overwhelming ‘Never Let Me Go’ vibes in this novel when the notion of how to define and prove ‘real’ love was discussed, and I couldn’t help thinking of Tommy and Kath, especially as the context of using ‘true love’ as a last resort bargaining tool was so very similar. This link between his two novels felt so palpable and direct that I can’t help but think it must have been purposeful, stemming back to these central questions: are people who are in love more deserving of being spared than those who are not? Is it more tragic for people who are in love to face their mortality?

Ultimately, compared to ‘Never Let Me Go,’ I would brand this book as subtly dystopian because, although it is obviously set in a technologically-driven society, the tensions over the environment and genetic editing are very much in the background. Additionally, the sinking weight of this imagined world’s situation is concealed well behind false, blinding rays of relative normalcy, whereas the hints in ‘Never Let Me Go’ are searing.

Upon reflection, this novel could be analysed from an eco-critical perspective. It could perhaps be interpreted as Ishiguro telling his readers to care more about the environment and to appreciate the simple things, like the sun’s warmth that invigorates us and brings us joy. If one zooms in on the thread of comments made by characters in the novel about the climate crisis, there is a sense of panic paired with a lack of agency. The main symbol of the endangered environment in this dystopian setting is the mysterious ‘Cootings Machine’ that pours out pollution. Defamiliarisation is employed as a device to mystify the reader as to precisely what the ‘Cootings Machine’ is, which acts to make it all the more threatening. Essentially, Klara’s ignorance to the technological infrastructure surrounding her forms a fog around the reader, disarming them. This limited perspective that we must view this dystopian world through keeps the novel mesmerizing, as we are forced to learn alongside Klara. Ishiguro places such an emphasis on visibility to show that Klara can absorb as much information about the world as possible but all she will ever really do is observe it from various vantage points: whether in the AF store, Josie’s house or in a car, always with a blinkered capacity to truly understand. I liked that Ishiguro never became didactic in this novel, however, I do wish that there was more detail about how the wider world functions and a touch more of an environmental scope to the story.

My final consensus is that this book deserves a solid 8.5/10 – my only criticisms were that the plotline became quite far-fetched at times which affected the realism Ishiguro usually builds and sustains perfectly. I felt that at times it lacked some of the ineffable magic of his previous work as it seemed as if it was geared towards a young adult audience. Having said that, I did thoroughly enjoy reading this book and I finished it within two days because it was that suspenseful. Overall, it possessed a certain understated kind of gravity, veiled by Klara’s brightness and optimism, that made it engrossing. This juxtaposition was one of my favourite aspects of the novel, along with the metaphysical debate over the essence of the human heart and whether technology can ever fully replicate a person. In the speech awarding Ishiguro with his Nobel Prize for Literature in 2017, the “great emotional force” of his novels was highlighted as his asset, and I couldn’t agree more. I have yet to read a book by Ishiguro that doesn’t simultaneously grab me by the heartstrings and make me question everything about the world around me. If you haven’t read any of his oeuvre, I would seriously recommend doing so!