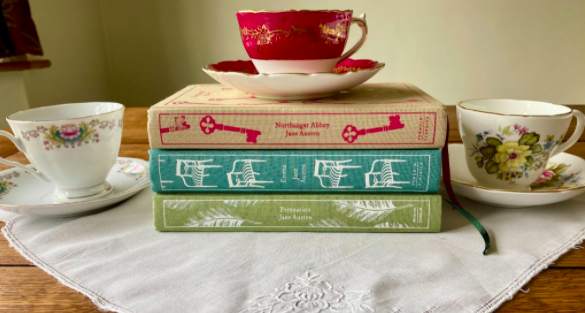 The Austenian world is one I could never tire of. I have re-read the following three books a number of times because Austen’s sharp wit never dulls, and the familiarity of her distinctive style never fails to deliver warmth. Out of her amazing oeuvre, these three commanded my attention the most and linger in my mind to this day. As Jane is known for her compelling opening lines (like the ever-quotable start of Pride and Prejudice, “It is a truth universally acknowledged…”), let’s start there:

‘Northanger Abbey’ (completed in 1803 but published posthumously in 1817)

“No one who had ever seen Catherine Morland in her infancy, would have supposed her born to be an heroine.”

This is an ingenious, iconic way to open the novel as it already has the reader enticed to discover Catherine’s unique journey to becoming a true heroine. At once, it establishes the satirical tone of the book in its portrayal of Catherine. This approach of describing Catherine as extremely ordinary and plain is amusingly subversive to the typical beautiful female figures that graced the pages of fiction at the time. Through this novel, Austen shows that a heroine can be who you least expect, depending on how they react to their circumstances and whether they can grow and transform into a greater version of themselves over time. Catherine’s obsession with Gothic novels leads her astray for a time, giving way to entertaining scenes. For example, she envisions robbers stealing away with her in their carriage. This fixation on Gothic plotlines stems from her deep-seated desire for an interesting life rather than the one we find her living at the beginning. Through her trip to Bath, she finds a villain, a suitor and, along the way, a new, wiser Catherine. Out of all three, I find ‘Northanger Abbey’ the most satisfying of Jane’s masterpieces because of Catherine’s incredible character arc and also because it is by far the most transparently humorous as Austen directly mocks Catherine through her narration.

“Emma Woodhouse, handsome, clever, and rich, with a comfortable home and happy disposition, seemed to unite some of the best blessings of existence; and had lived nearly twenty-one years in the world with very little to distress or vex her.”

This opening line is such a departure from that of ‘Northanger Abbey,’ showing the versatility of Austen’s oeuvre. What is most impressive about this novel is Jane Austen’s ability to make the reader invest in the story without liking Emma, and then later on, to change the reader’s mind about her completely. Like Catherine, Emma undergoes a major change in character as she grows increasingly self-aware to the damage of her manipulations. Her friend, Mr. Knightley, is integral to this shift because, unlike everybody else in her life who would never dream of criticising her, he is not afraid to tell her when she misbehaves. In fact, one of Knightley’s most famous lines is, “Badly done, Emma.” From the beginning of the text we are made aware of Emma’s refusal to ever marry for the sake of her father, this is a unique plot line for Jane Austen, and one to bear in mind. Deception, match-making and grave mistakes ensue in this story where everything seems to be in flux, especially our opinion of characters. After reading this excellent novel I would suggest watching the latest adaptation with Anya Taylor-Joy as Emma – it’s the best one.

“Sir Walter Elliot, of Kellynch-hall, in Somersetshire, was a man who, for his own amusement, never took up any book but the Baronetage; there he found occupation for an idle hour, and consolation in a distressed one…”

Anne Elliot’s father, Sir Walter, is one of the most entertaining characters in the novel due to his excessive pride over his family history. His pride sustains a significant knock once he learns they must uproot themselves from Kellylynch-hall because they are living beyond their means. Curiously, there is a central similarity between the Elliot family in ‘Persuasion’ and Jane’s life; her family had to be persuaded to move due to financial troubles. ‘Persuasion’ was the last novel fully completed by Austen before her death. I love the deeper themes of the novel that seem to go beyond her other ones, musing on the indefatigable nature of love and the inability to deny it. To me, this focus on a lengthy, complicated attachment makes it one of the most intriguing love stories across all her works; especially as their courting begins and ends long before the action of the book. Anne is significantly older than Austen’s other heroines and due to this, seems to have a much more stable sense of self.

“Jane Austen Novels Are All The Same”

Each of these three protagonists, Catherine, Anne and Emma, are very different from each other in nature, which I think is part of the reason I’ve picked these three novels in particular. I’ve heard people say that all of Austen’s novels are ‘the same,’ but I definitely disagree based on what I have unpicked in this article. Two of these novels are largely set in Bath, although the protagonists have entirely opposite opinions on the city. Naive Catherine Morland is enamoured with Bath because it’s where exciting things happen whereas sensible, mature Anne Elliot “disliked Bath and did not think it agreed with her – and Bath was to be her home.” What Anne and Catherine have in common is their innate sweetness of character, whereas Emma is known for her initial selfishness. This is largely because Emma is spoiled by pride and vanity due to her upbringing which dislocates her from Anne and Catherine who are quite neglected by their families, although to differing degrees.

I would strongly recommend reading these three Jane Austen novels and drawing your own conclusions about where, and to what extent, these spectacular heroines converge. Next up I am going to read the last two Jane Austen novels on my TBR: ‘Sense and Sensibility’ and ‘Mansfield Park.’

From bookstagram, I’ve noticed that ‘Sense and Sensibility’ is very popular amongst Austen fans, and I am very excited to find out why! Let us know in the comments what your favourite novel by the one and only Jane Austen is.