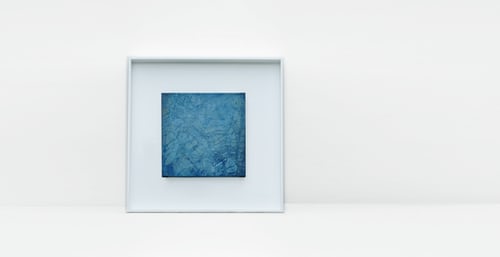 The woman ran her hands over the photo frame. The wood scraped against her uncut fingernails, the sheer glass backing ran smoothly under the pads of her fingers. She could not bear to turn it around, to stare into the eyes of those she had lost, and she contented herself to stare at the backing of the frame.

The wood was a soft brown, it matched the caramel color of the recliner and the accent wall in the living room. The caramel on the frame was accentuated by stripes of coffee, not from the tree itself but manufactured onto the frame. There were identical frames in every house she went to, the same stripes along the top-right and bottom left of the frame, the same s-shaped squiggle running down the left side.

It hung backwards on her wall, the blank white backside of the photograph facing all those who came into the house. The woman had not the heart to take it down from the wall, and she let the sunlight that streamed through her living room window reflect off the glass instead of removing the photo altogether. She had done this for six months now.

But it was moving day. It had to be taken down. The woman’s hands lingered at the sides of the photo, lifting it off the hook. The weight entered her hands, and the wood was cold against her sweaty palms. She heaved a deep breath, and turned the photo around to face her.

Michael and the boys stared back at her. They had identical smiles, the same mop of light brown hair, the same dusting of freckles. The woman let out a sob. She had not looked at their faces since the funeral six months ago.

The woman brought the photo to her face, letting her tears stream down the front.

But it was simply a photograph. They would never answer.